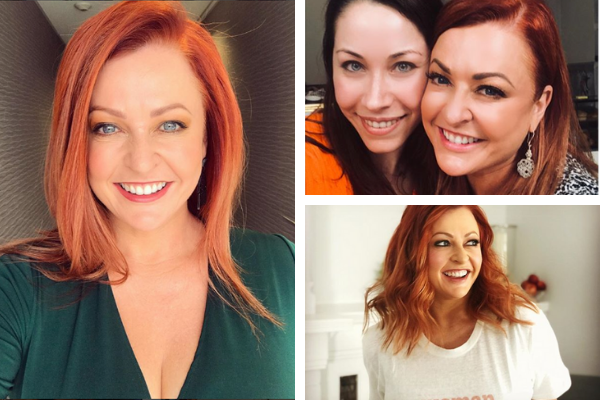 Shelly Horton. Her name is heard a lot these days from the TV screen and it’s her fiery locks and vibrant energy that makes her memorable in my mind. Sipping my morning brew, I flick on the Today Show to see Shelly – a regular on the breakfast show – sharing her opinion about the news of the day. If you don’t know her, Shelly runs her own video production and media training company called ShellShocked Media, appears on Channel Nine with regular segments on the Today Show, Today Extra and Weekend Today and 9Honey.com.au, MCs for high-profile events like Business Chicks’ 9-to-Thrive; and is an ambassador for Pink Hope and the National Breast Cancer Foundation.

How does she do it all? What’s her career story? I had to find out…so, I stalked her on Instagram for a while (as you do) and decided to DM her (‘direct message’ for the non-millennials) asking for an interview. Within 24 hours she said yes. 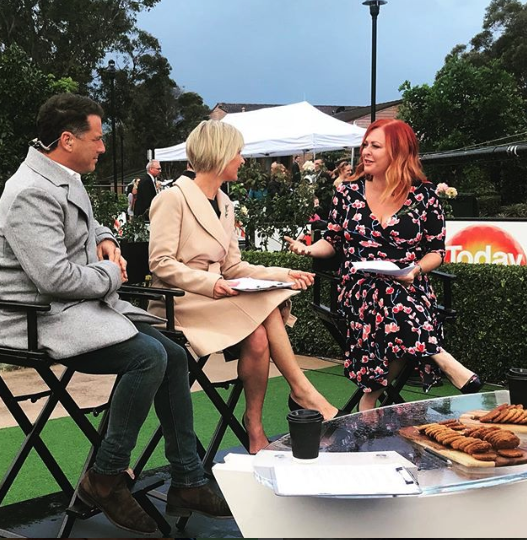 On set at the Today Show

Fast-forward two months and I’m sitting at her local coffee shop, scrolling through her Instagram feed trying to figure out how she manages to do TV, her own business and MC events around Australia. She arrives fresh from the Channel Nine studio, and after embracing me in a hug (“I’m a hugger, Janine.”) we sit down and get to business.

So, Shelly, I ask, tell us a bit about your career journey, how did you get to where you are today?

“Okay, well it’s quite a long and convoluted journey. It’s important for women to know that my career has not gone in a straight successful line – it’s been an epileptic bumble bee, going here, there and everywhere and I think these days you have to embrace that.”

I soon find out that she grew up in a Queensland country town called Kingaroy, famous for peanuts (for a peanut-lover like me I had to Google and found top 10 things to do there…who knew? ??‍♀️), and completed a journalism degree. Soon after, Shelly started her career with ABC radio in Melbourne as a crime reporter and loved it: “I’ve seen so many dead bodies…I know, I sound like a weirdo. It fascinates me” and she was one the first women to be a crime reporter “in a very male dominated area”.

A female crime reporter in a male-dominated industry? You must’ve had a thick skin and strong stomach, I commented. She agreed with a nod while sipping her tea and proceeded to tell me her next career move which involved something we’ve all heard before and struggle to do: fake it till you make it.

Faking it till you make it

Moving across the world, she left radio life to become a line producer for TV. She must’ve seen my blank stare because she quickly clarified: “a line producer checks spelling and grammar to see if the super is right…not very glamorous.” It was a for a 24-hour news show, she explained, and that day the sports presenter came in hosting a husky voice. He just finished the first bulletin when his voice diminished to a squeak and the executive producer turned to Shelly and said:

“Did you ever read the news in Australia?”

Though she had not. She hadn’t even been in a TV station before that job. With rattling nerves, she got through the next hour presenting the news. She admitted she made a few errors, but it didn’t cost her the job. In fact, the opposite happened. The executive producer called her into his office, told her she has the ‘it’ factor and offered her very own entertainment show that ran seven days a week in London.

I love this part of her story because it shows how one moment of self-belief can change your whole life.

And it changed hers because she returned to Sydney and began carving her career in Australian TV. Shelly admits, though, that it wasn’t easy in the beginning. During one of her first reporting gigs in Australia she was removed as an on-air presenter after a producer said she wasn’t the right look, saying she was too fat for TV. “I went home and balled my eyes out, but I was desperate to work in TV, so I stayed.”

Wow, I replied in disbelief, my coffee cup stationary in the air mid-sip. 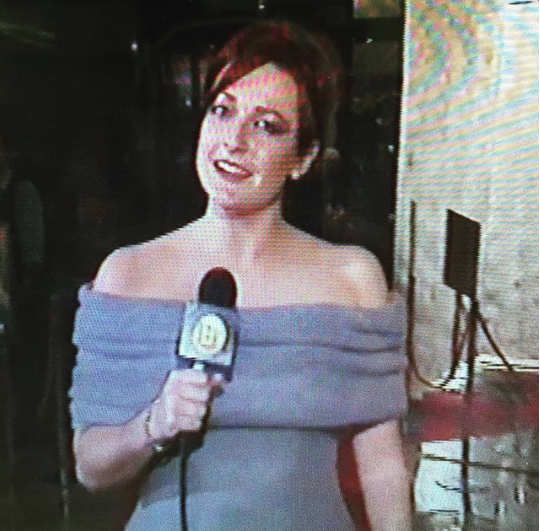 “Flashback 20 years ago to my first ever Logies. It was 1998 and 24yr old me was reporting for the Australian version of Entertainment Tonight”

The importance of setting career goals

That didn’t hold her back, though, if anything it drove her to get really clear on her career dreams.

“I got a job at the ABC as a news reader for Triple J, but I wasn’t really good at it, but I was lucky because I met one of my best mentors: Alison Ray. She’s still a mentor of mine.

Alison told me: ‘Shelly, I think you’re great and all, but this isn’t your dream, is it?’

She asked, ‘what’s stopping you?’

I couldn’t give her an answer.”

Shelly ended up going to a goal-setting course that changed her whole life and career. “The best thing I took out of it was a goal-setting technique which is to write a letter to yourself on your best workday of your life. So, from the moment you wake up, to the moment you’re asleep, it has to be the best day. It took me six weeks but then I figured out my perfect work day and from there I chunked it down to actionable steps.” 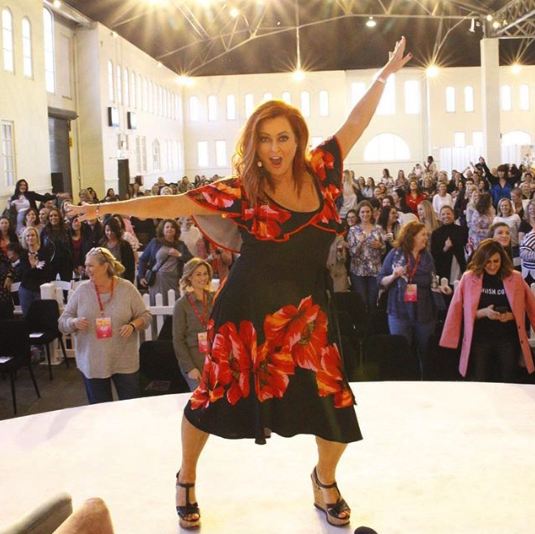 Note to readers: this is actually hard. I’ve started, stopped and started this goal-setting exercise again and I’m still figuring it out!

As part of this exercise Shelly asked herself ‘what am I doing today to get to that dream?’, and broke down the dream goal into yearly, monthly, weekly and daily goals.

“I thought to myself, what am I doing in radio when I want to get back to TV? So, I broke it all down and gave myself a year to get back into TV. Every month I had to send my show reel out to someone. Every week I had to tell someone from my networks that I wanted to get back into TV – and that was hard. And my daily goal was to go to work TV-ready rather than Triple J ready. So, I used to be hair in pigtails, ripped jeans reading the news then I decided to change how I dressed and started getting up early, blow drying my hair, doing my make-up and wearing something suitable for TV.”

Lesson: dress for the job you want, not the one you have.

Shelly admits that small things like that made such an impact so quickly. “Six weeks doing this, one of the producers pulled me aside and said: ‘a couple of weeks ago you said you wanted to get back into TV, well a mate of mine is running a show on the ABC called George Negus Tonight and I’ve told him about you and he’s going to give you an audition.’ I got the job.”

Her TV career continued to have a few bumps, but she persevered, picturing her best workday as motivation.

Fast-forward to today and she’s achieved most of the goals she wrote down 18 years ago. “Within my perfect work day, I’m living in Bondi with my dog. I own my own production company – in the letter version it was called ‘Storm in a D-Cup’– and I would drive to work, park in my VIP spot to host the Shelly Show – a TV show by women for women – and then head to the Logies.”

Today, Shelly runs ShellShocked media, (Storm in a D-Cup sounded good, though!) a video production company with her husband and gushes about Mr. Barkely (her pooch) often on Instagram. Shelly is also a regular on Channel Nine’s Today, Today Extra and Weekend Today and 9Honey, confessing that where she’s at right now is a career highlight. 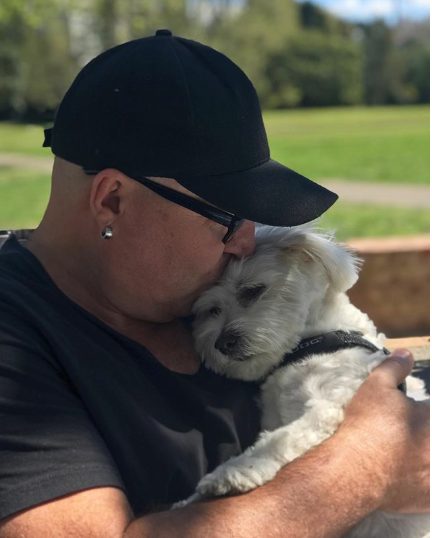 Shelly’s two loves Mr. Barkley and her husband Darren…maybe in that order

I wrap up this interview asking for her final thoughts. She sighs, her mouth curling into a smile and says:

“Women supporting women – this is super important to me. I’m of the belief that there’s enough cake to go around. I’ve done my walk and talk mentoring for seven years, where we all meet and go for a walk for an hour. It always starts with ‘what is the worst thing that’s happened in the last three months?’ and then ‘what is the best thing that’s happened in the last three months. Women aren’t great at talking themselves up and I figure there’s already a boys club so why not create a girls club.”

Pick your tribe and love them hard

With that in mind, I’m off to pick my tribe of women! 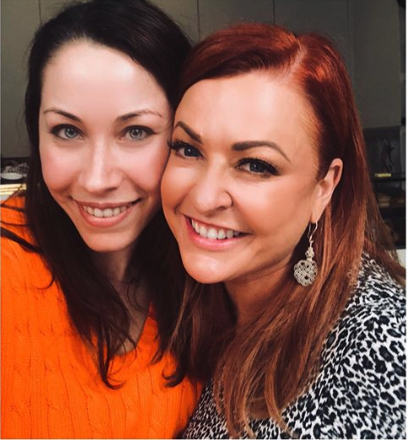 Interested in media training? Take Shelly’s online course, I know I am!

**A big thank you to Shelly Horton for being so candid in sharing your story with me and taking the time out of your crazy schedule to do so. I look forward to seeing you live on the Shelly Show!

Previous post: How Public Sector Professionals Can Build a Personal Brand (and Why They Should)