How self-doubt kills your dreams – and how to overcome it. 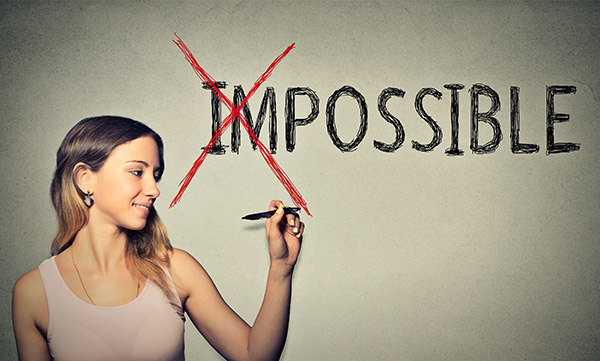 Hands up if you’re fantastic at what you do, you’re excelling in your field, and you’re an absolute asset to your team.

Instead of raised hands, I’m usually met with one of two responses – an uneasy silence, or a modest rationalisation:

“I did just get promoted, but I got lucky.”

“I am good at my job, but anybody could do it.”

“My business is doing well, but it’s probably because of that marketing guy I hired.”

We’re smashing the glass ceiling, with more women than ever running our own businesses, sitting on executive boards and even leading nations. And yet we can’t seem to escape self-doubt.

Why do women have such trouble acknowledging our achievements?

Researching for their book The Confidence Code, journalists Katty Kay and Claire Shipman discovered ‘the confidence gap’. Themselves suffering from self-doubt despite being at the top of their field, they found that men and women are separated by a profound gulf in confidence that dramatically affects the success of the latter.

Men overall tend to consider themselves skilled, competent and deserving of their achievements.

Women, on the other hand, are more likely to attribute their success to luck, expressing doubt in their abilities and experiencing anxiety around their performance and prospects.

Why is self-doubt a problem?

As long as you get the job done, you’ll be fine… right? After all, as Kay and Shipman found out, men and women performed equally well despite the difference in confidence. Unfortunately, they also found that confidence matters just as much as competence.

Quite simply, you need confidence to succeed. One study referenced in The Confidence Code showed that self doubt prevented us from pursuing opportunities we were every bit as qualified for as our male counterparts who, for the record, showed no such hesitation!

The effects of self-doubt also have a financial impact. Men feel they deserve to earn an average figure 20% higher than that expected by women. Perhaps because of this, they initiate salary negotiations four times as often, asking for up to 30% more.

Where does it come from?

Perfectionism is a serious confidence killer, widely agreed to be a predominantly female problem. We tend to tie our confidence to perfection, scared to go forward unless we’re 100% sure we’re the best, the smartest, the most qualified.

Couple those perfectionist tendencies with a habit of comparing ourselves to our peers and you have a recipe for paralysing self-doubt. In the age of social media, when everyone around us is showcasing their achievements and editing out their failures, it’s easy to believe that everyone is succeeding but us.

Then there’s representation. Despite our progress in the workforce, women are still noticeably underrepresented at a senior level. When we look around an all-male room, we get a subtle message that this is not our world. And as we get higher up and powerful women become an even rarer sight, the message only gets stronger.

What can we do about it?

It’s easy to see how female self doubt can flourish in male-dominated environments, but the key findings from The Confidence Code suggest that we have a lot more power than we realise. So how do we harness it?

The short answer? No! We bring our own unique qualities to the table, and research shows that when we let go of self doubt and embrace those qualities, female-led businesses actually outperform male-led ones.

Researchers Zoe Kinias and Jessica Sim found that core value exercises can help women to boost their confidence in competitive business settings. The women they studied were simply asked to reflect on and write about their personal values for a few minutes at the beginning of the day.

For those that took part in the exercise, the gender confidence gap was all but eliminated. Kinias and Sim aren’t exactly sure why, but they suggest that focusing on their values helped the women to give their work a personal context in an impersonal setting, increasing feelings of self-worth and purpose.

That said, there are some things men tend to do that could benefit us, too.

As an example, women generally don’t apply for jobs unless they meet 100% of the criteria. Men? Just 50%! Refusing to settle for anything less than perfection can seriously hold you back. Sometimes, it’s ok to allow yourself to be simply ‘good enough’.

Remember, everything starts with an idea and it’s rarely ever born perfect. If the idea has promise, you’ll work as a team to shape it into something great. If it doesn’t, you’ve at least shown a willingness to innovate.

As much as it feels awkward or uncomfortable you need to this –  your boss and/or clients want to know. If you don’t tell them, nobody else will. One writer described a time she confronted her boss about being passed over for promotion despite a long list of successes. His response? “Had I had any idea you’d achieved those things, you’d have been top of my list.”

Does this sound like you? How many opportunities have you missed because of self doubt? What could you achieve if confidence were no object?

Email me now to book your FREE 20-minute coaching session and find out why self doubt is holding you back – and how you can overcome it.

Want to reach your potential at work? Get practical tips you can use in my weekly newsletter

Next post: How to ask for a pay rise – and get it.